Gastric bypass surgery is one of the most popular and reliable procedures for helping patients achieve healthy, sustainable weight loss.

How Gastric Bypass Can Help You

Live the Life YOU Want

After a gastric bypass, you will have increased energy, improved health, and greatly boosted confidence, allowing you to go out and live a full, active life.

One Operation Can Change Your Life Get Started With A Consultation

If you are ready to overcome obesity, schedule a consultation with Dr. Cribbins and his team at the Texas Center for Bariatrics & Advanced Surgery in Plano, TX.

Dr. Cribbins is currently offering both in-person and virtual consultations.

To request a time that works for you, fill out our online form or give our team a call:

I'm Ready to Get Started

I had a fantastic experience with Dr. Cribbins! He is warm and very personable. He takes time to answer all of your questions and concerns thoughtfully. Barbara, his medical assistant, is very helpful. Returning all of my phone calls and providing follow up to me promptly and professionally. His entire staff is spectacular!! You will be treated like an individual here and not just another patient. You won’t fall through the cracks or be forgotten here. Highly recommend!

Thank you Dr Cribbins for making my Christmas wish come true. For many years I have wanted to visit my family in California for Christmas, but I have not been able to do so because I did not fit in an airplane seat. I have lost 325 pounds thanks to having weight loss surgery with you. I was able to fly home this Christmas and see my family! Not only did I fit in an airplane seat I fit in a coach seat. Thank you for the life changing surgery! I can now go anywhere I want and not worry if I will fit in a seat on a plane, at the movies, in a restaurant or ANYWHERE else. I have my life back and I loving my life again. Thank you Thank you Thank you !

What Is a Gastric Bypass?

In the early days of bariatric surgery, performing a gastric bypass required large incisions that exposed the organs. Later, surgeons gained the ability to operate laparoscopically, so they were able to insert cameras and surgical tools through small incisions and perform the surgery without exposing the organs. Now, the next great innovation in bariatric surgery is here: the Da Vinci Xi Surgical System.

Dr. Cribbins of Plano, TX, is at the forefront of innovation in robotic surgery. He began using the Da Vinci system in 2012, and since then he has earned the title of Da Vinci Robotic Surgeon of Excellence.

The Da Vinci Xi Surgical System is an array of robotic arms that can be precisely controlled by Dr. Cribbins. When he uses it to perform a gastric bypass, he can operate through tiny incisions and make accurate, delicate maneuvers that aren't possible with human hands. The system provides him with a three-dimensional, high-definition view of the abdominal cavity, so he actually has a better view of your organs than he would with the naked eye.

The cumulative result of using this technology is a faster, safer, more predictable surgery.

The Benefits of Robotic Surgery

"Dr. Cribbins is awesome!!! He listens and takes his time. He is very genuine." Jaymie Barrett, 5-Star Google Review

You will be put under general anesthesia for the duration of the bariatric surgery.

Using the Da Vinci Xi Surgical System, Dr. Cribbins will divide your small intestine into an upper portion and a lower portion.

Next, Dr. Cribbins will use the Da Vinci tools to divide the stomach, creating a small stomach pouch that food will go into.

Dr. Cribbins will conclude the surgery by closing your incisions with sutures. You will most likely have a hospital stay of a few days before you are cleared to return home and begin your weight loss journey.
Get Started with a Consultation

Fortunately, our ultra minimally invasive approach to weight loss surgery results in recovery periods that are shorter and easier than ever before. That being said, a gastric bypass is still a significant change to your body's anatomy, and you should plan to minimize physical activity for a while before you are able to resume your normal routine.

Most patients have a hospital stay of two to five days after gastric bypass surgery. Some soreness and discomfort during this time is expected, so Dr. Cribbins and the hospital staff will do everything they can to ensure that you are as comfortable as possible.

Upon returning home, most patients need to limit their activity for around a month. You will need to follow a very specific diet as your stomach and intestines heal. You will start with a liquid diet and gradually move on to more solid foods. We will give you very detailed instructions so you know what you are able to eat.

We like to schedule several follow-up appointments at our Plano office for our bariatric patients so we can monitor their health and weight loss.

Choose the Team that Cares for You Contact Us Today

At the Texas Center for Bariatrics & Advanced Surgery, we're not just interested in performing as many surgeries as possible. We genuinely care for our patients and want them to achieve improved health and a better quality of life through weight loss.

When you meet with Dr. Cribbins for an initial consultation at our office in Plano, TX, he will consider your unique concerns, goals, medical conditions, and more in order to recommend the most suitable approach to weight loss for you. Medical weight management, for example, might be better than weight loss surgery for some patients.

Discover why men and women from all over the Dallas-Fort Worth area are glad they chose Dr. Cribbins. Request an initial consultation by filling out our online form or giving us a call:

Our Results Say It All

With over 20 years of experience, our board-certified surgeon has changed countless lives in the greater Dallas-Fort Worth area. Check out our before-and-after gallery to discover just how life-changing weight loss surgery with Dr. Cribbins in Plano, TX, can be.

View More of Our Patient Results

Wonderful People, Great Nurses, Awesome Doctor!! It has been a pleasurable visit with each appointment. I feel the love and care from moment I step foot in the door. The explanations and conversations with Dr. Cribbins nearly always answers any questions that I may want to ask before I even think of one.

I went in for my pre-op visit with Dr. Cribbins today and everything went smoothly. His staff treated me with respect and they answered all my questions thoroughly. I look forward to my procedure next week. Thank you Dr. Cribbins and staff.

Roux-en-Y gastric bypass surgery is typically only recommended to patients who:

If your weight has contributed to health concerns such as type 2 diabetes, heart disease, obstructive sleep apnea, or high blood pressure, gastric bypass surgery may be recommended as a treatment.

Are Serious about Weight Loss

Gastric bypass surgery is not reversible and will forever change the way your body responds to food. You should only consider a gastric bypass if you are ready to make significant changes to your lifestyle and diet after the surgery.

In recent years, gastric sleeve surgery, also known as sleeve gastrectomy, has risen in popularity as a weight loss surgery. Sleeve gastrectomy is a more straightforward procedure than the Roux-en-Y gastric bypass: it simply involves reducing the size of the stomach. Here are some comparisons to keep in mind when deciding between the two surgeries:

Dr. Cribbins is able to complete both gastric bypass surgery and gastric sleeve surgery with his ultra minimally invasive approach. When you visit our office in Plano, TX, for a consultation, Dr. Cribbins will determine which bariatric surgery is better for you.

What Does "Roux-en-Y" Mean? 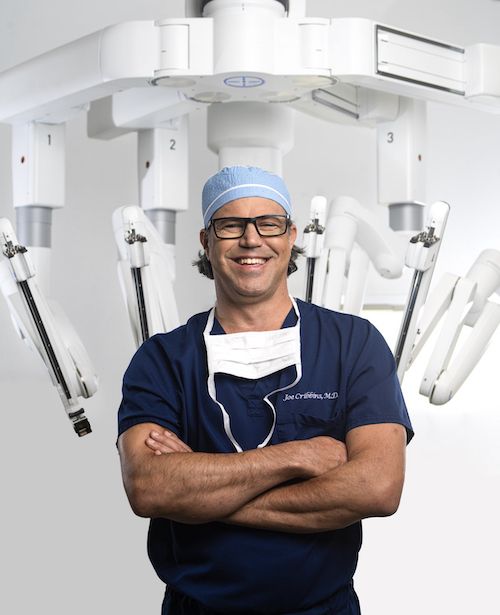 Our highly skilled and experienced board-certified surgeons, specialize in ultra-minimally invasive general and bariatric surgery and they are affiliated with a number of national associations, including: